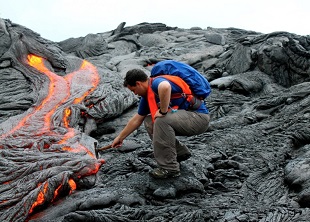 Take a journey into the fascinating world of earth science and learn about the dynamic forces at work on, in and around the planet. A comprehensive and fascinating course.

Discover the physical history of earth and the forces driving its changes.

Learn about rocks, minerals, gases, oceans and plate tectonics and much more

This in-depth science course would benefit from further study especially within the science disciplines of environmental studies, biochemistry I and II, marine studies I and II and if your goals are toward a career in tourism then the courses in adventure tourism, travel photography and eco tour management will give you additional expertise.

Complete the form below and we'll send you a free info pack.

It was a really wonderful experience for me - I have been interested in the subject all my life - but migrating to Australia 25 years ago, raising a family and working did not give me a chance - now that I am retired I can enjoy learning about this topic - keeps my old brain challenged - i consider going on.....

Each course is made up a number of lessons or units.  Each of these has self assessment questions, a set task (practical homework) and an assignment which you can upload online.  Click below to read about each of the lessons and what you will learn.

When you have completed the lessons of your Certificate course, you will be given the option of taking the optional exam. It's okay if you don't want the exam, we still issue your Careerline Certificate. For Advanced Certificates however, the exam is compulsory (per module) and are included in the course fee.

I am currently doing my PhD in Environmental Science at the University of Technology Sydney. My research is centered around the effects of climate change on the hatchling velvet gecko population in Australia. This involves collecting wild gravid geckos and incubating their eggs under laboratory conditions. Through exposure to a variety of incubation temperature treatments, I have operationalized my investigation which aims to determine the effect of higher temperatures on hatchling geckos. I am currently in stage 3 of research, which comprises writing a thesis and developing manuscripts for publishing. Prior to my present endeavors within the scientific field, I have also successfully completed a B.Sc. degree, majoring in Zoology, (specialised field: Wildlife Management) with first-class honors and an M.Phil. Degree in Life Sciences. My passion has always been teaching and thus I have worked for seven years as a lecturer at various universities. I love helping students with their own studies.

Connect with other like-minded students and get help from the teacher whenever you have a question.

Graduate from your course knowing that you have what it takes to reach your next step.

Can I pay in installments?

Yes! We offer great payment plans, however full payment up front is the cheapest. You can choose the best payment plan for you from the course page, or call us on 07 55368782 to talk to one of our course consultants for a custom plan.

Can I study from anywhere in the world?

We have many international students. Careerline's range of courses are suitable for any one, anywhere in the world.

Do I get a discount if I enroll in a second course?

Yes. You may claim a 5% fee discount when you enroll in a second course, and a further 10% off a three-course package.

Do I have to sit an Exam?

No. If you are enrolled in a Certificate course (100hrs), the exam is optional. You will be issued with a certificate which proves that you are competent in all units, if you choose not to sit the exam.

Do you have set start dates?

There are no set start dates, you may start at any time. Our courses are all self-paced. As our home page says, ‘Courses for Anyone, Anywhere, Anytime’. ‘Anytime’ includes the start time of your choice. However, we do encourage our students to submit assignments on a regular basis. Wherever possible, we suggest developing a study routine.